A deliciously smooth and creamy Israeli pudding, vegan Malabi is made with coconut and almond milks, flavoured with rosewater, and topped with luscious syrup and pomegranate seeds.

At the end of last year we took a foodie tour of the Levinsky market in Tel Aviv. One of the (many) highlights for me was the delicious vegan malabi. Malabi is traditionally a dairy dessert, but this one was made with coconut milk. It was creamy, sweet and delicious. I promised myself I would attempt to recreate it when we got home.

Shavuot is approaching, and dairy desserts are the order of the day. My mind returned to the delicately scented, smooth, vegan malabi pudding, crowned with sweet syrup and pomegranate seeds. I decided at once that this was the perfect dessert for the festival – all the loveliness of a milky pudding with none of the actual milk!

You can make this pudding ahead and keep it in the fridge until you’re ready to serve it, so it’s a great choice if you want to do advance prep. You can then simply garnish with syrup and pomegranate seeds when it’s time to serve, and you’re good to go. If you prefer, you can also let people add their own toppings at the table for a more ‘interactive’ dessert.

You may be wondering why I’m so keen to have a dairy-free dessert. Like many Ashkenazi Jews, my insides don’t always appreciate large quantities of dairy products, even if my mouth does! Plus, this year we have a vegan guest for Shavuot. While I can make something just for him, it’s always nicer to have a dessert that everyone can enjoy. This creamy vegan malabi fits the bill nicely!

Malabi is very popular in Israel and often pops up on dessert buffets, cafe menus etc. It was introduced to the country by the Ottomans, and shares some features with the Turkish pudding muhallebi whose roots lie in early Persian cuisine. It has the same culinary ancestors as the more familiar (and altogether blander) blancmange, which is also a milky pudding thickened with cornflour.

In Israel, malabi is usually flavoured with rosewater. A bright pink raspberry or pomegranate syrup in then used to top the pudding. There are similar dishes in Cyprus, Greece, and across the Middle East. However they are usually served with a rose syrup, and often for breakfast rather than dessert.

I always find it fascinating to see how a relatively simple dish can evolve and change as it is adapted by different communities!

The ingredients for this deliciously creamy vegan dessert are quite simple – you might already have them in your pantry! If not, they can easily be found in most well-stocked supermarkets. To make vegan malabi yourself you will need:

A balance of sweetness

This vegan malabi recipe uses a mixture of coconut and almond milks, with just a touch of sugar. I didn’t want the custard to be too sweet because it gets drenched in syrup before eating. The custard/pudding part of the malabi is simple to prepare. However, after wondering how I was going to make a pomegranate syrup I had a brainwave – grenadine! I bought Teisseire sirop de grenadine from Sainsbury’s (in the fruit squash section) but there are several other brands listed as kosher by KLBD.

If you’re feeling keen, you can make your own syrup by boiling up pomegranate juice and sugar. Use an equal volume of each, and simmer until you get a syrupy consistency. It should keep in the fridge for a week or two. It probably won’t be as vibrantly pink as grenadine though.

I was really pleased with my vegan malabi pudding. Even DH – not a big eater of desserts – said that my malabi was “perfect“. I wasn’t sure how my daughter Kipper would react to the floral rosewater flavour, but she loved it too. Although she’s a massive pomegranate fan, so perhaps that’s what swung it.

For reasons best known to myself, I decided to film myself making this vegan malabi. This is only the second recipe video I’ve ever made and it’s about 1000% better than my first attempt! The full recipe and instructions are below. (No, that isn’t me playing the piano, sadly.) 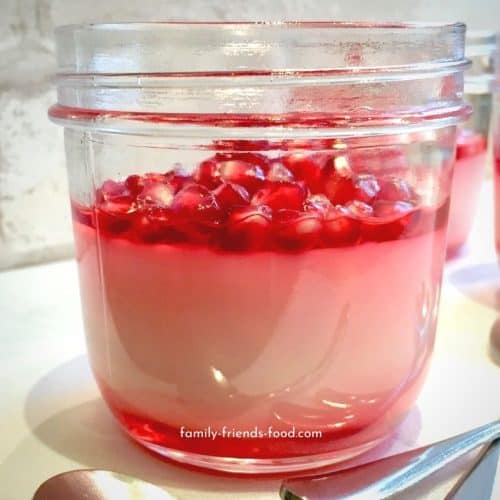 You can make your own pomegranate syrup by boiling pomegranate juice and sugar, instead of using grenadine.  A little shredded coconut on top of the syrup and pomegranate seeds is also a tasty addition.

If you need more vegan Shavuot dessert inspiration, how about this vegan panna cotta with roasted rhubarb? Or this 10-minute halva ice-cream pie?

And if you need savoury dishes too, here are 40+ make ahead recipes for easy Spring and Summer entertaining. Or take a look at all my Shavuot recipes here. Finally, you might like to follow my Shavuot board on Pinterest, which has tasty recipes from across the internet!