Sahlab is rich, creamy and delicious, and topped with nuts and cinnamon. This traditional hot drink is a luxurious cold weather treat.

I was 18 years old before I visited Israel in the winter for the first time. Despite having lots of cousins, aunts, uncles and friends there, all my previous visits had been during the hot summer months, so delicious seasonal winter specialities like sahlab had totally passed me by. 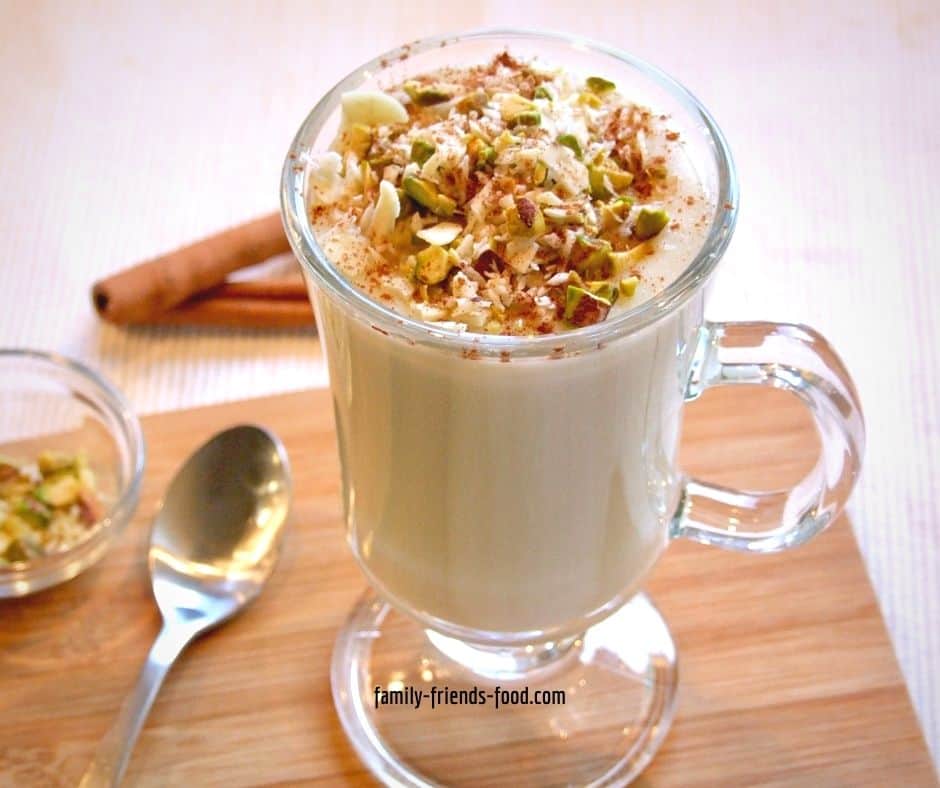 Say it with orchids…

Also known as salep, Sahlab is a thick, fragrant, milky drink, that was developed from ground orchid tubers by the ancient Greeks and Romans. It subsequently gained popularity across the countries of the Ottoman Empire, including the area which is now the State of Israel.

People across the Middle East still eagerly consume sahlab. In Israel colourful street vendors pop up in the winter months selling it in takeaway cups from huge urns. It comes topped with nuts and cinnamon and is utterly delicious.

In recent years, boutique coffee shops have also started to sell sahlab. Sometimes there are different versions, with unusual toppings or additions like white chocolate, rose petals or chilli.

Through thick and thin

Although you can buy it everywhere from Turkey to Egypt, Jordan and beyond, the thickness of the sahlab seems to vary by region. In some countries it is allowed to cool and set completely, and is served as a pudding. In other places, it is thinner and more drinkable. The Israeli version seems to be somewhere in the middle. Just about slurpable but also thick enough for spooning.

According to Gil Marks, writing in  The Encyclopedia of Jewish Food

, “In the seventeenth century, England and Germany adapted the orchid beverage… pronouncing the name saloop. Around the same time, two other foreign hot beverages appeared in Europe, coffee and tea. All three soon had their advocates, with saloop initially becoming the most widespread in England… During the nineteenth century, as coffee and tea emerged as inexpensive everyday fare, the popularity of saloop in Europe and America faded.”

Myths and legends around the medical properties of salep/sahlab abound. Traditionally, the drink is made from orchid roots, which are said to resemble male genitalia (orchis is Greek for ‘testicle’). As such, the plant and its derivatives allegedly have aphrodisiac qualities.

Medieval Jewish philosopher Maimonides (the Rambam) wrote that sahlab could be used to, “strengthen respiration, to revive the spirits, to arouse sexual desire…” and more which I won’t go into here! (See Practical Materia Medica of the Medieval Eastern Mediterranean According to the Cairo Genizah by Efrayim Lev and Zohar ʿAmar if you want to know more.)

Perhaps it’s just as well that it’s now more usual to thicken sahlab using cornflour than ground orchids, and the light, floral flavour is provided by vanilla and rose water. In Israel you can buy ‘instant’ sahlab – just add milk! – but here in the UK  you need a little more creativity if you want to enjoy a cup of this wonderful drink.

Fortunately, even making sahlab from scratch is not too difficult, and it has the advantage that you can ‘season to taste’ – I find the instant stuff is often too overpoweringly flowery. Traditionally sahlab is quite heavily sweetened, but making it yourself also means you can adjust the sugar to taste. I put a tablespoon of sugar in one cup, which seems a lot but is probably less than the average!

If you’re concerned about your sugar intake, you could probably swap out the sugar for an alternative sweetener. I haven’t tried it but I imagine erythritol or stevia-based sweeteners would both be fine in this recipe.

What goes on top of sahlab?

My topping here is the traditional coconut, pistachio, almond mixture plus a little ground cinnamon. However, I’ve also added cocoa nibs to this before, which is fabulous. And you sometimes also get raisins and dried fruit. Be as creative as you like!

Sahlab makes a lovely change from hot chocolate on a cold winter’s day. Why not treat your loved one to a cup?

Approx. per serving: 256 calories, 9.5g fat, 34g carbohydrate, 10g protein. Exact nutritional values will vary depending on how much topping you add to your sahlab.

Nutrition Facts
Sahlab
Amount per Serving
Calories
256
% Daily Value*
* Percent Daily Values are based on a 2000 calorie diet.
Keyword almonds, cinnamon, coconut, nuts
Tried this recipe?Let us know how it was!

If you like Israeli drinks, try cafe hafuch – upside down coffee, or limonana – refreshing mint lemonade. Or how about a warming cup of spiced hot chocolate with hawaij l’cafe.

You might also  enjoy sahlab’s cool dessert cousin – malabi. This rosewater-flavoured set pudding is delicious! Serve it topped with a luscious syrup and pomegranate seeds.

I’m linking up to a few foodie challenges. Treat Petite, hosted this month by United Cakedom on the theme ‘Like it, Love it, Gotta Have it!’ which is basically how I feel about this sahlab! I’m hoping that even though it isn’t a bake, it’s a single serve pudding/drink, so that should count, right? (Treat Petite is organised by Cakeyboi and The Baking Explorer)

This website uses cookies to improve your experience while you navigate through the website. Out of these, the cookies that are categorized as necessary are stored on your browser as they are essential for the working of basic functionalities of the website. We also use third-party cookies that help us analyze and understand how you use this website. These cookies will be stored in your browser only with your consent. You also have the option to opt-out of these cookies. But opting out of some of these cookies may affect your browsing experience.
Necessary Always Enabled
Necessary cookies are absolutely essential for the website to function properly. This category only includes cookies that ensures basic functionalities and security features of the website. These cookies do not store any personal information.
Non-necessary
Any cookies that may not be particularly necessary for the website to function and is used specifically to collect user personal data via analytics, ads, other embedded contents are termed as non-necessary cookies. It is mandatory to procure user consent prior to running these cookies on your website.
SAVE & ACCEPT