How to make delicious, crispy, ‘chopped and fried’ gefilte fish balls from scratch – so much better than shop bought! Eat them with chraine for a real treat.

Chopped and fried gefilte fish, or ‘C&F’ as it was known in our house, was a regular fixture on our family menu. My Grandma would make it every week, on a Thursday. She would first mince the fish and onion using a hand-cranked mincing machine, then add the egg, seasoning and matza meal “until it looks right”. I don’t think she ever referred to a recipe.

Significantly, Grandma kept her dry ingredients in unlabelled glass jars in a cupboard – she could see the contents through the glass so why bother with labels? One week, the fishballs just didn’t taste right. There was an awkward atmosphere around the table as we ate them. Then someone mentioned it… Apparently Grandma had grabbed the desiccated coconut instead of the matza meal! Oops!

British fried gefilte fish balls have evolved from the traditional Ashkenazi ‘gefilte fish’. In continental Europe, this would have been made from carp or other freshwater fish, which was minced then stuffed back inside the fish skin before and poaching.

When Jewish immigrants came to Britain, they found that carp was not readily available. An Island nation, the Brits tended to eat sea fish such as hake, haddock and cod.

Today in the UK the fish in chopped and fried fish balls is typically sea fish – either just one type, or a mixture. The minced fish mixture is simply formed into balls or patties and then fried or baked. The balls can also be poached in fish stock if preferred.

Grandma’s gefilte fish balls would be fried in an open frying pan in about 1-2cm (just under an inch) of oil. She always knew when the oil was the right temperature, and her chopped and fried fish always came out crispy and browned – delicious! Hot, freshly-fried fishballs are the best!

These days, I’m afraid I don’t make fried gefilte fish on a weekly basis. There are a couple of reasons:

1) You can buy pretty good ones in the supermarket (not as good as home made, but OK), and
2) frying fish makes your hair, clothes and house STINK.

My Mum had a single electric ring in her garage that she used when making chopped and fried fish, and she wore an old dressing gown and a shower hat while she did it!

Since I don’t make chopped and fried gefilte fish so often, I do need a little help with getting the frying just right. The most important thing is the oil temperature, which can be hard to gauge, so I use a Thermapen kitchen thermometer.

You may think that a kitchen thermometer is the sort of gadget that only professional chefs would require, but I was surprised by how useful it is in a domestic kitchen too. Using it to measure the temperature of my frying oil, for example, meant that the whole process was easier, and less stressful, and the results were much more consistent. 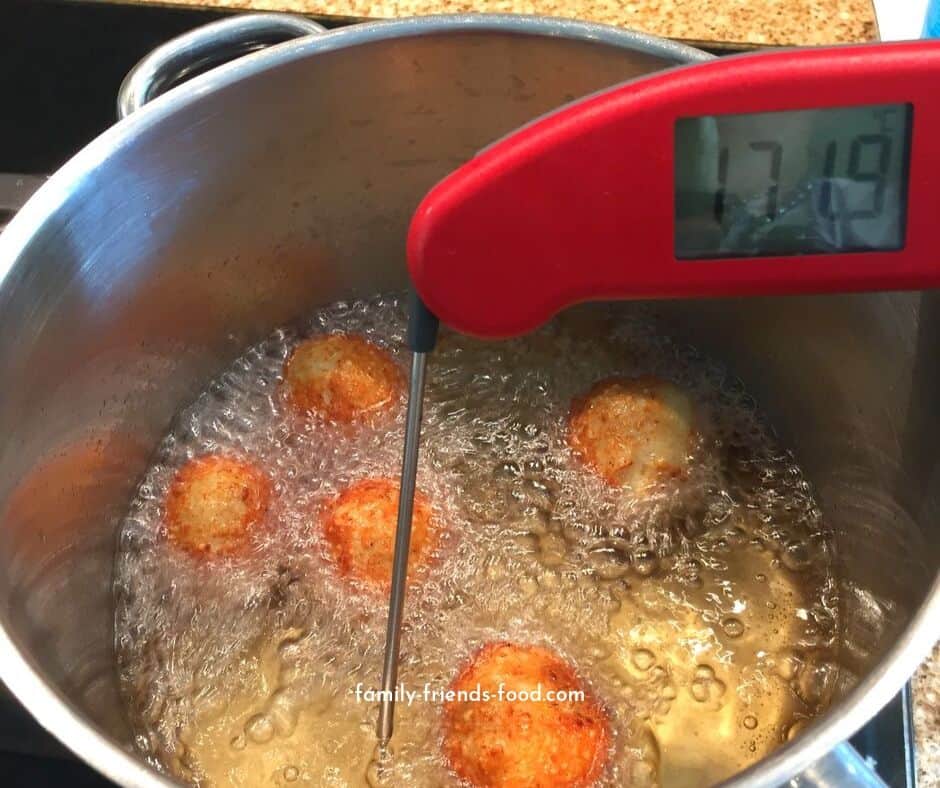 The Thermapen is chunky and easy to use. It gives an accurate temperature reading in only 3 seconds on its large format digital display. It’s waterproof, so easy to clean. Best of all the probe folds up when not in use. This means you can chuck it in a drawer and not worry about spearing yourself!

The Thermapen switches on automatically when you unfold the probe, and it can be angled so that it’s easy to insert into whatever you’re measuring – whether it’s hot oil or other liquid, or solid foods like meat, fish or even baked goods.

Did you know you can test whether your challah is cooked by measuring the internal temperature? It’s done at 190°C (about 375°F), in case you’re interested.

Which fish is best for gefilte fish?

Grandma used a mixture of hake and haddock, but any flaky white fish is fine. There’s no need to splurge on expensive fishes like halibut though, since you’re only going to mince it! Staples like cod are perfect for this recipe.

Interestingly, gefilte fish is not fried across most of the world. If I’d had to guess which nation had thought to immerse the balls in hot oil, I would probably have said America. No, apparently it’s we Brits who came up with the chopped and fried fishball. Well done us!

How to serve chopped and fried fish balls

Fish balls can be served hot, warm or cold, although cold is the most traditional. These would have been prepared in advance to eat on Shabbat, or as part of a light lunch.

For a truly authentic experience, serve with a dollop of extra-strong chraine (horseradish and beetroot sauce) on the side. Makes 16-18. 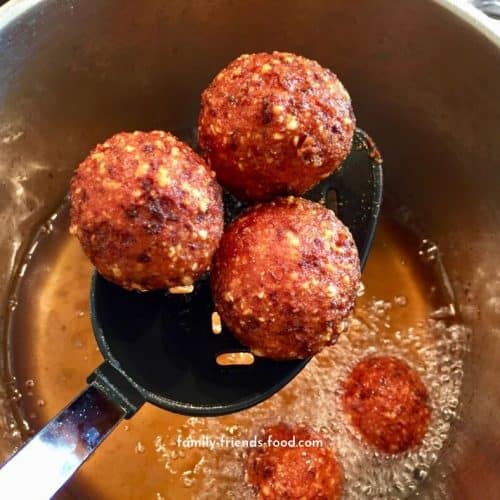 When you're ready to fry

Use your thermometer to keep checking the oil temperature as the fish balls cook. If it goes above 190°C (375°F), turn down the heat, otherwise the fish balls will brown too quickly and may still be uncooked in the centre.

NB: I was provided with a Thermapen kitchen thermometer to try. I was not obliged to write a positive review and all opinions are my own. 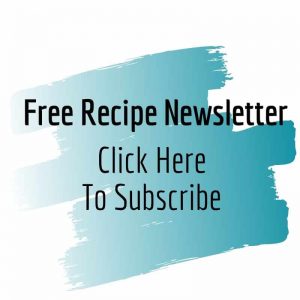