All the deliciousness of hot potato latkes with no mess, no fuss, and no standing around by a hot stove for ages! Perfect for Chanukah.

My daughter Kipper and I had a wonderful Chanukah day out a few years ago.

, at JW3. I’m always amazed at how a book that can be read in 5 minutes can be turned into an hour long show, and The Latke… didn’t disappoint. The cast were incredibly talented and acted, sang and played multiple musical instruments to bring the story to life.

Kipper and I had front row seats and she was enthralled and delighted.

Looking for ideas to help make Chanukah extra special? My Ultimate Family Chanukah ebook is available now! It’s packed with resources, recipes, family activities, information and printables for every night of the festival.

What IS a latke?

Latkes are crispy golden potato pancakes that are traditionally eaten on the festival of Chanukah. The Chanukah miracle revolves around a jar of olive oil – for more details read this explanation – and so fried foods feature heavily this week.

Following the show we had a delicious lunch, and, somewhat inevitably, a latke. Kipper ate it in the back of a taxi on our way to the station.

We got the train home in time to light our first Chanukah candle, and open our first presents – we try to spread the presents out over all 8 nights, so there’s always something special to look forward to.

Having had a latke themed day, it seemed only right to make potato latkes for our dinner. It was the first night of Chanukah after all!

But I really didn’t fancy standing in front of a hot stove, tending a pan of spitting hot oil, and cooking three latkes at a time for an eternity. Especially while DH and Kipper were busy enjoying themselves with the presents in the other room.

There had to be a better way to cook them, and there is!

I heated up the oil on a tray in the oven, dolloped on the potato latke mixture, then ‘fried’ the latkes all in one go in the oven. No fuss, no mess, no oil-splattered clothes and stinky-chip-shop hair. AND I got to be there while Kipper opened her first present.

Honestly, I will never cook latkes on the stove again. This method is a GAME CHANGER!

Just to be clear, this method fries the latkes in the oven. These are not low-fat, minimal oil, baked latkes. They are the real deal!

The recipe calls for a cup of oil (200ml). You may not need all of it but it is necessary to fill your baking sheets to a depth of 1-2mm (about ⅛ inch). Again, this is not a light spray of oil, or even a greasing of the tray. This is a serious amount of oil so that the latkes can FRY in the oven.

As you dollop the latke mixture onto the tray, you should hear it sizzle in the hot oil, just like it would do in a frying pan. Think of your oven tray as a giant frying pan and the oven as a 3D wraparound stove. The only difference is that you can let them get on with cooking without giving them so much personal attention.

So if you’re looking for some kind of low fat healthy alternative to latkes, then I’m afraid you’re in the wrong place. Personally, I’d say just have one ‘proper’ latke, and then eat something else. There’s nothing sadder than a low fat latke, right?

What kind of oil?

I cooked one tray of our delicious potato latkes with sunflower oil and another with olive oil. DH claimed the olive oil ones were better, although I’m not sure I could tell the difference. Olive oil is certainly more traditional for Chanukah. I suggest you use whichever you prefer.

Potato latkes – mix it up

, with some minor amendments.

Evelyn claims that this amount will serve 4-6 people. HA! We devoured the lot between the three of us.

Make plenty – they are addictive. Especially if you enjoy oily carbs, and who doesn’t, really? We had our crispy oven-fried potato latkes with the not-very-traditional accompaniments of smoked salmon and sliced avocado. They were delicious. 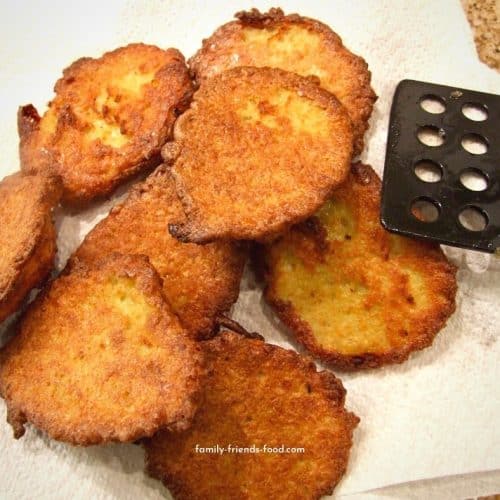 Prevent your screen from going dark
All the deliciousness of hot potato latkes with no mess, no fuss, and no standing by the stove for ages! Perfect for Chanukah or any time of year.
5 from 5 votes
Print Recipe Pin Recipe
Prep Time 10 mins
Cook Time 30 mins
Total Time 40 mins
Course Side Dish
Cuisine Jewish
Servings 16 latkes
Calories 163 kcal

These latkes can also be cooked the traditional way in a frying pan on the stove. Simply heat your oil over a medium heat and cook the latkes for a few minutes on each side until golden and crispy.

If you have latkes leftover, why not enjoy them as part of a Full Jewish Breakfast? To reheat, simply place on an oven tray and bake at 180°C (350°F) for 10-15 minutes until heated through. They’re also great with fish dishes like this baked cod, or alongside brunch favourites such as mushroom shakshuka.

And don’t forget to check out my Ultimate Guide to Chanukah Food Traditions which includes over 50 delicious seasonal recipes from around the world.